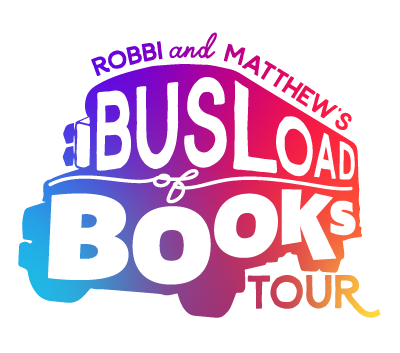 DONATE!
In Which Brian and Matthew Plug In the Bus and Push the Envelope
by Matthew
August 5, 2022
The Bus
Comments: 0 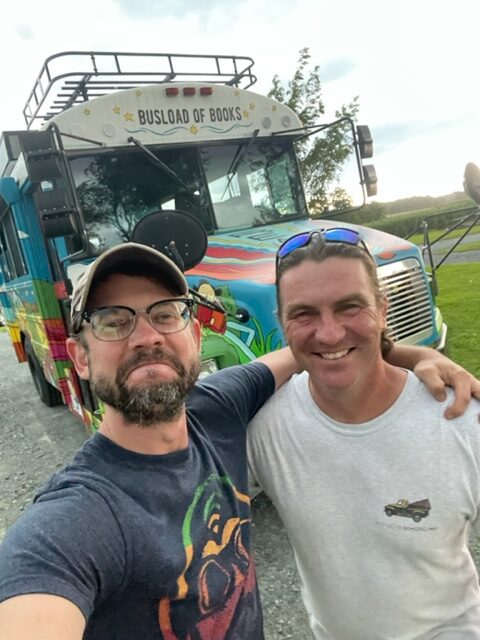 Yesterday, Brian and I headed out in the bus.

Our goal: to test the systems and troubleshoot before Robbi and I hit the road at the end of the month. 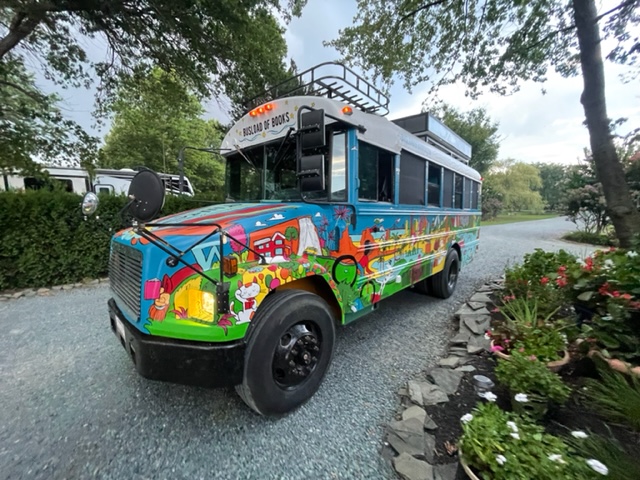 We started out tired. Brian has been working on the bus around the clock. I have been managing non-mechanical tour preparation. Brian uses power tools. I type things. Both activities are equally exhausting and masculine.

We grabbed some food and headed for Rock Hall, Maryland, a little town about twenty minutes from Chestertown. Brian’s friend Meagan Wick, co-owner of the beautiful Bay Shore Campground had comped us a site for the night, so we could see how the bus performed in a real-live RV park. 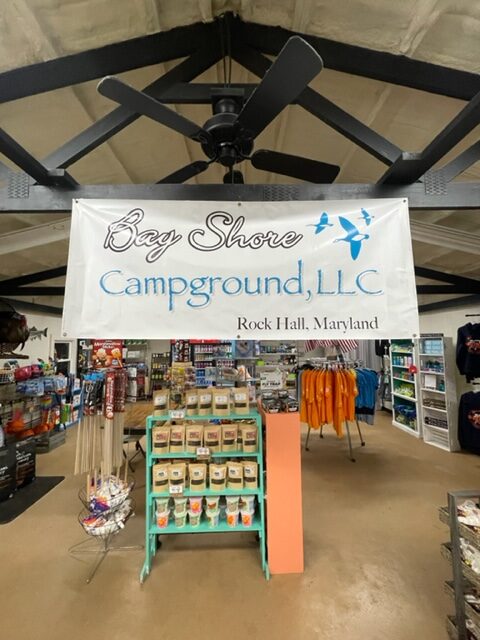 By the time we arrived, the weather had dramatically turned. As the clouds rolled in and whitecaps appeared on the Bay, I was surprised in a good way. The weather matched the drama of the moment. It felt ordained. 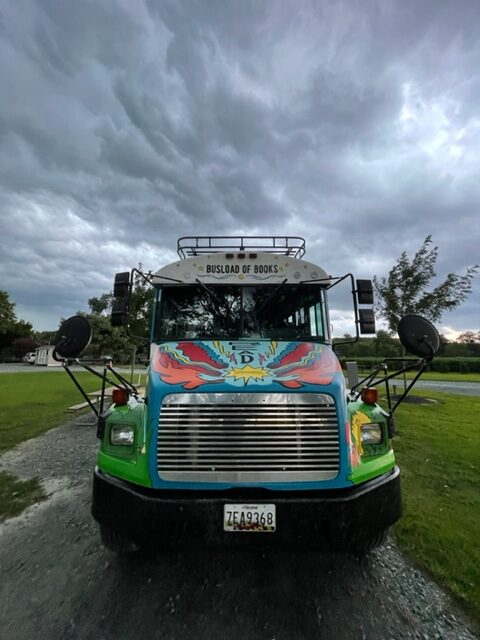 Sensing we would soon be wet, Brian and I hurried to plug in the bus. Our site offered a spigot for water, a series of outlets offering a variety of voltage options, and a place to get rid of the wonderful stuff that comes out of your toilet or sink. Brian had filled up our water tank before we left Chestertown, we have no toilet, and our gray water tank is not yet ready for dumping, so we focused on the power plug.

Because he is knowledgable, thoughtful, and forward-thinking, Brian acquired a 30-Volt surge protector, which is the blue thing in the photo. Its job is to protect the bus in the event of a power surge from the campground’s power supply. 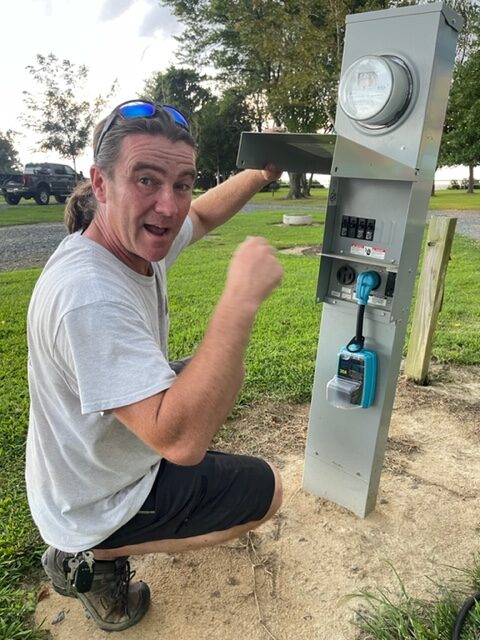 The next step was plugging in the bus itself. Brian, who believes in me, encouraged me to give it a try.

But I did not believe in me. The prongs were so strangely shaped. And there were three (3!) of them. 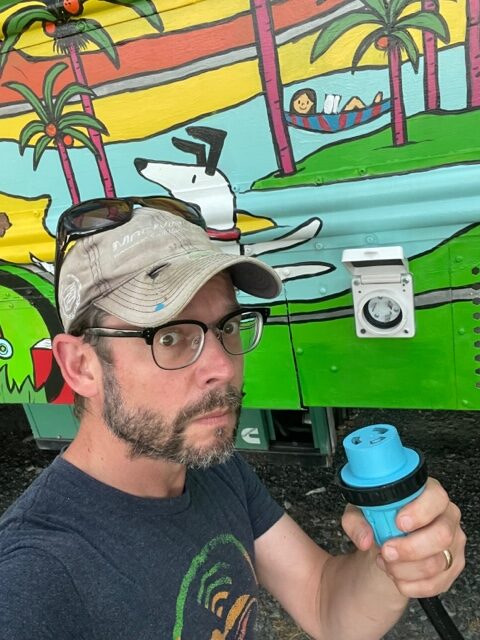 Nevertheless, lifted by Brian’s encouragement, I pressed on. And pressed in. 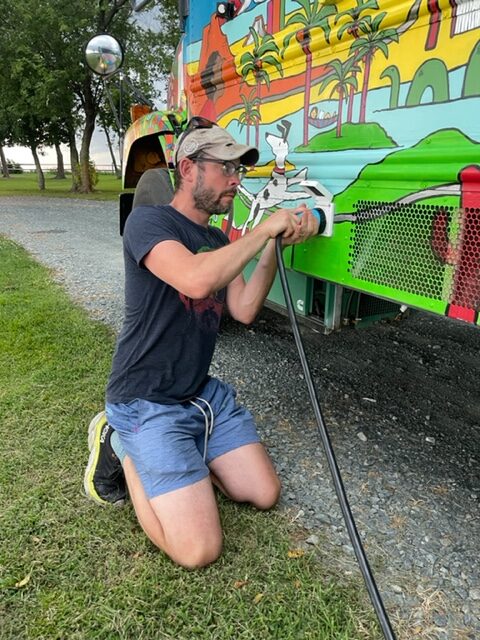 Did I rise to the challenge? Friends, I did. 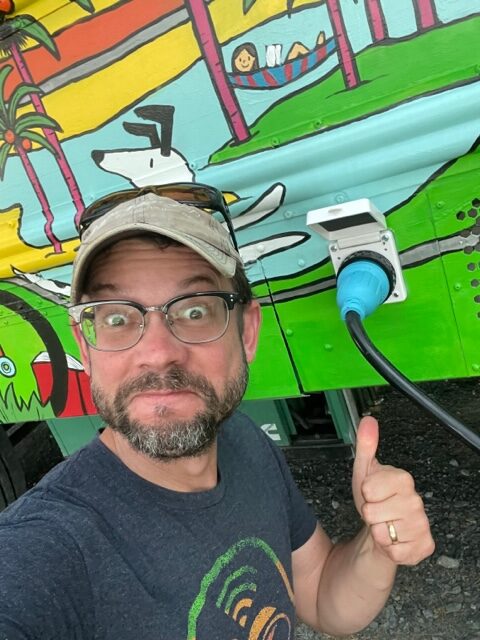 The plug inserted and twisted until it clicked, I then spun the ring that locks it in place, and suddenly, there was light! 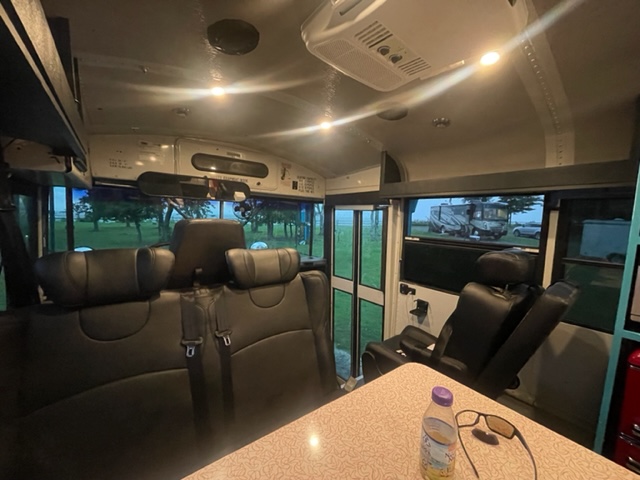 Light inside, that is. Outside, all heck was breaking loose. Not only was there wind and rain, but there was lightning. Hours of it.

Brian and I opened the windows and welcomed the cool breeze ate and exhaled with relief as the storm sent the heat away. 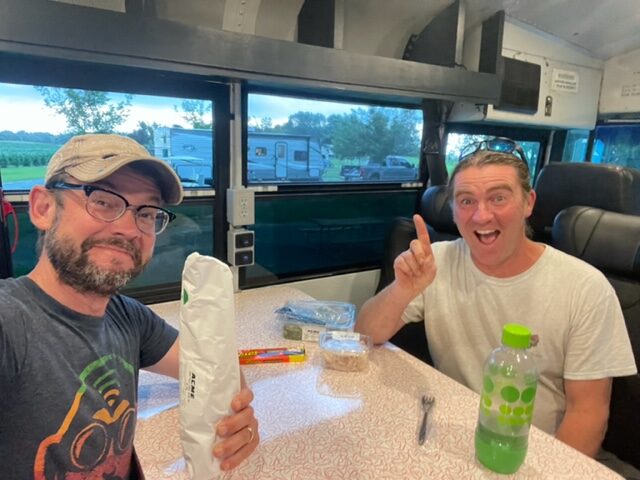 I am happy to report this did not happen. We reveled in the successful simultaneity. But only for a moment. Because no one wants the oven on in the summer.

Soon it was dark. We cranked up the pop top and set up Brian’s bed. 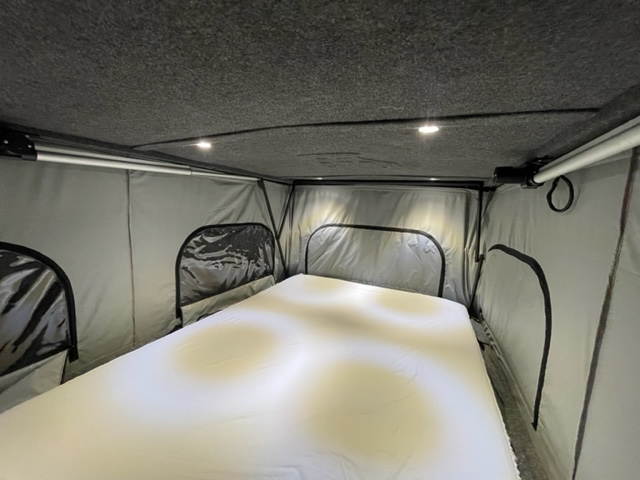 We collapsed the rear table and converted the jackknife couches and soon I had a place to sleep, too. 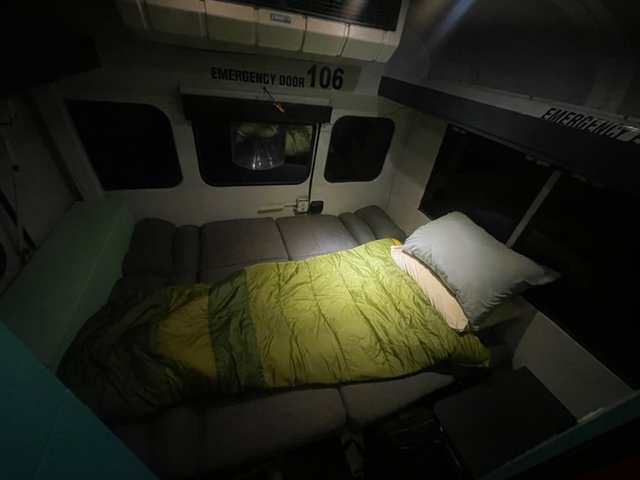 It was the first voyage for my brand new “restless sleeper” sleeping bag that Robbi got me. I was very excited to give it a try.

Before turning in, we risked the rain and went outside to appreciate the beauty of the lights. 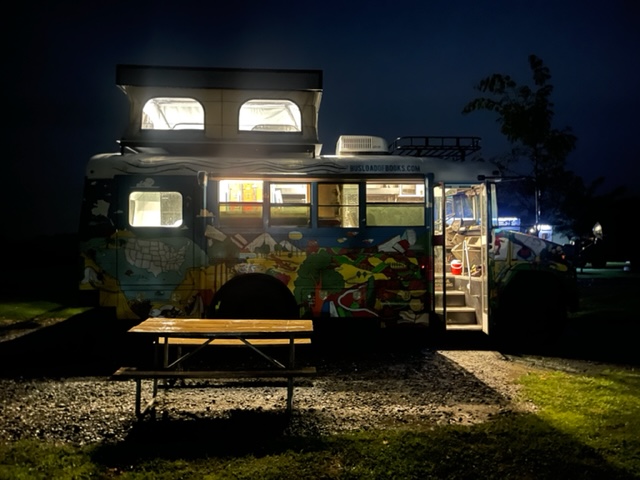 I can’t wait to see this bus in the heart of forests, in the open sweep of deserts, on the tops of mountain passes. But it was already beautiful on a patch of gravel just down the road as the rain fell.

Brian and I tucked into our respective beds and said good night, Waltons style. 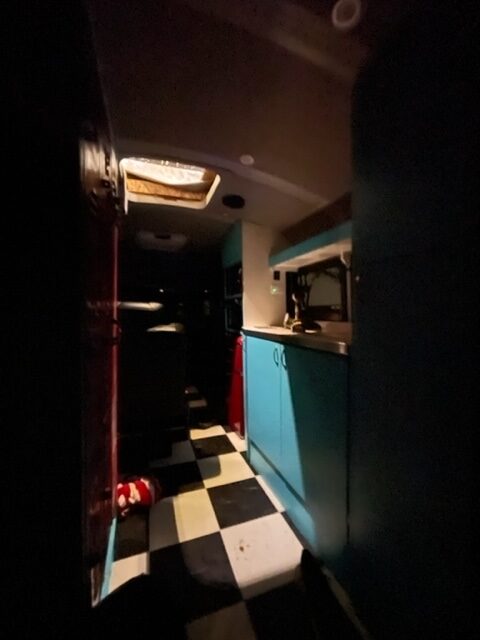 My plan was to prove my mettle by sleeping like a confident baby for ten straight restorative hours.

That isn’t what happened. Perhaps it was the heat or the humidity or the army of affectionate bugs that came in when the windows were down or the extremely strong mid-afternoon coffee drink I had or the excitement of the moment or the utter complexity of the multi-featured “restless sleeper” sleeping bag, but I had trouble falling asleep and woke up far too early.

But the morning was so lovely when it came. 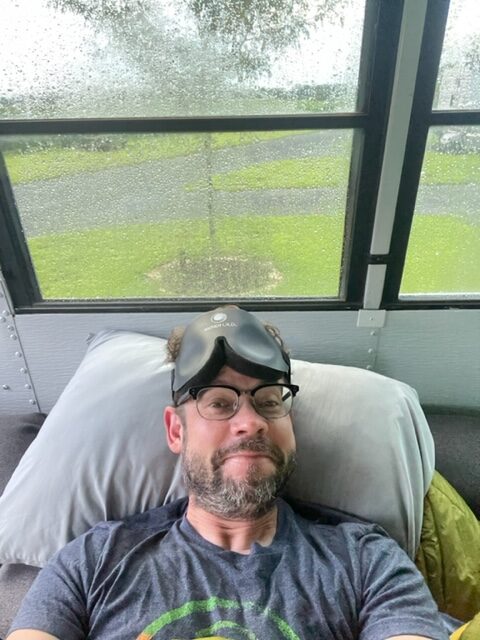 I will learn to only open the windows with screens. I will not drink so much coffee. I will get to know my sleeping bag.  I will not always feel the restless excitement of the first night sleeping on the bus.

In fact, I will never get to feel it again.

But what a first night it was. My thanks to Mother Nature for making it so interesting, and to Brian for building us this gorgeous rolling palace in the first place.

Much more will be said about the gratitude I feel for this person, but for now, I’ll just say there’s no one I’d rather have shared this milestone with.

← Prev: In Which Paint is Applied and the Great Blue vs. Green Debate Results in a Compromise Next: One Country: Three Questions → 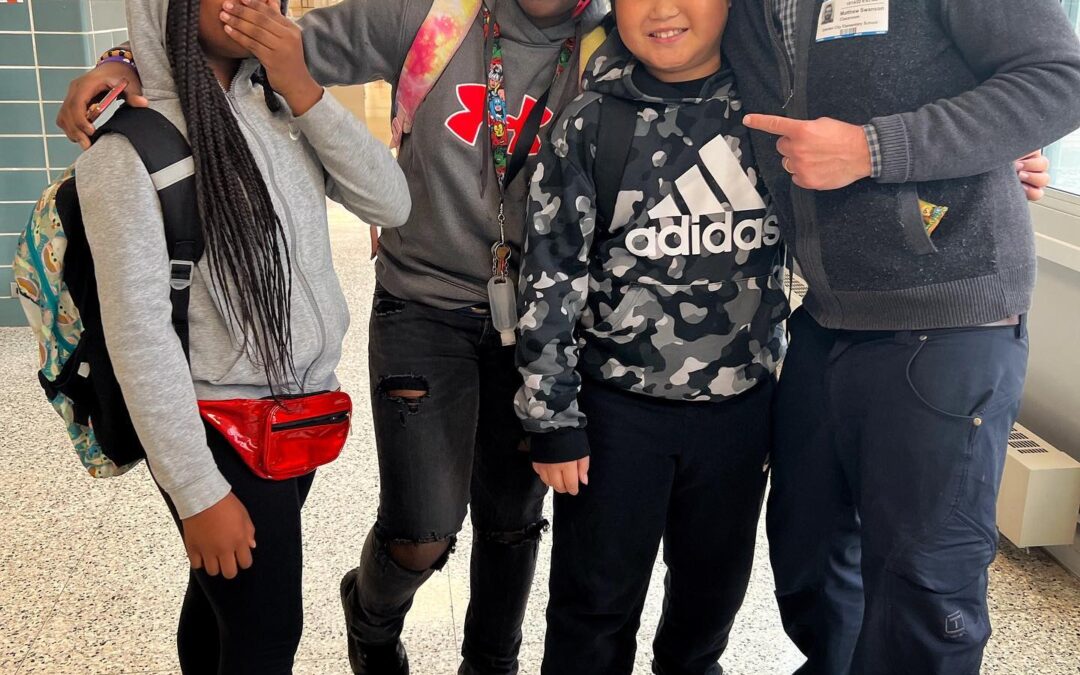 Last week’s visit to Ludlow Elementary began the night before we arrived at the school. Our host,...

The Busload of Books Tour is a year-long project to promote literacy and raise awareness of the challenges facing our nation’s public schools. 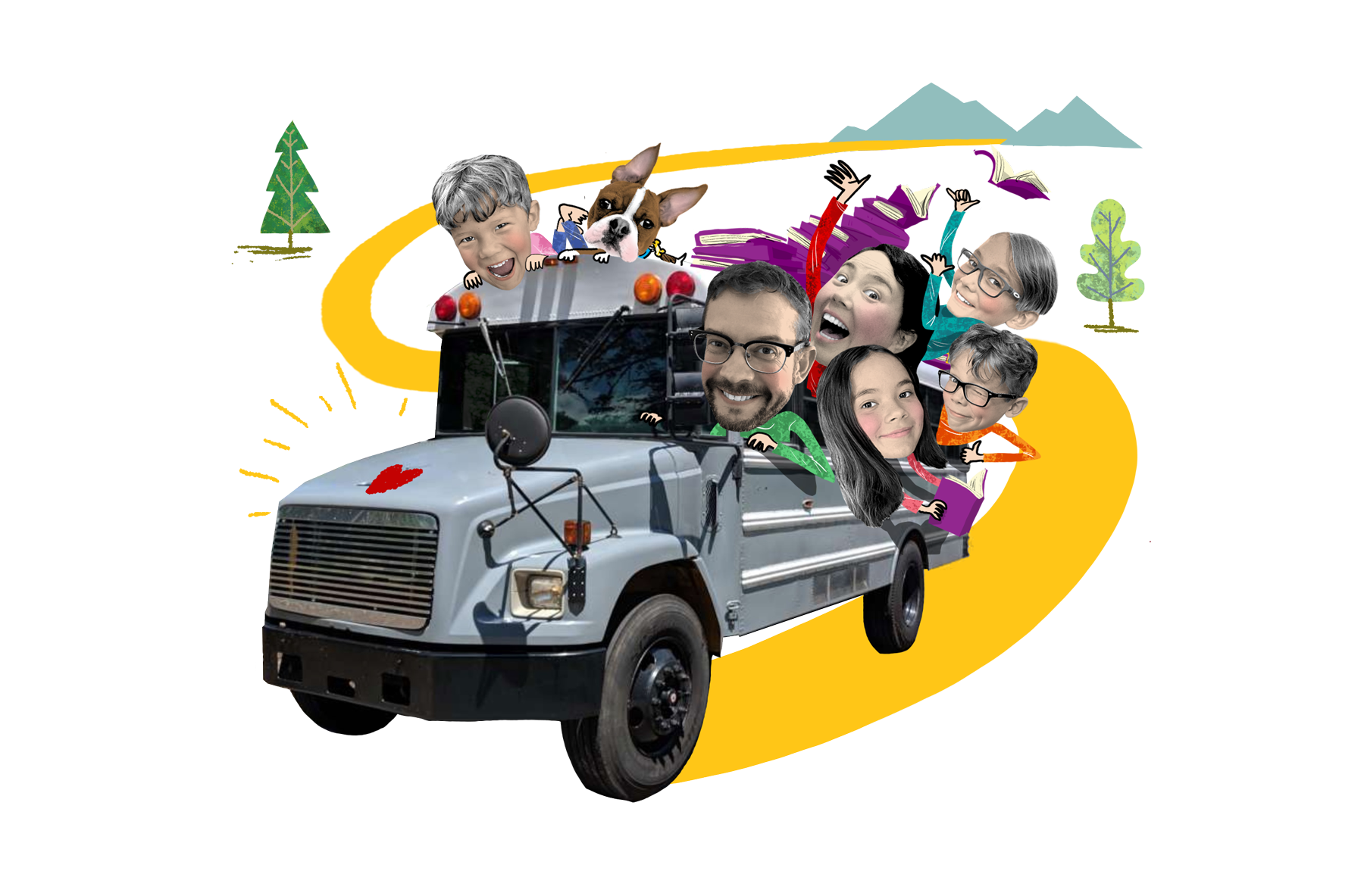 Author/illustrator duo Matthew Swanson and Robbi Behr (that’s us) and our four kids will spend the 2022-2023 school year traveling the country in a school bus/tiny home, visiting Title I schools in all 50 states (plus DC), and giving away 25,000 hardcover books to students and teachers from underserved communities.

CHECK OUT OUR ROUTE

As we travel, we will be blogging, vlogging and posting frequently to social media. All of our content will be appropriate for bringing families and students along on our ultimate road trip.

The Daily Minute: 12.9.22
In which, having just arrived in Texas, we plan to spend the night in Jasper County.

Robbi got this text from Erica Bridwell (known to friends and colleagues as “B”), the first-grade teacher who hosted Jasper during Tuesday’s visit to North Pike Elementary School in Summit, Mississippi. We signed a copy of Everywhere, Wonder for B, and Robbi had written in the dedication to “keep fighting the good fight.”

It’s a difficult time to be a teacher, especially at a school with limited resources and especially when serving kids who bring additional challenges to school. Educators need a boost every bit as much as their students do.

We’re sharing this to show that the tour is also for them, and maybe even more so.

“We miss y’all! It felt like a part of us left when y’all did. Y’all have NO IDEA the impact you’re making not only on kids, but adults too! I haven’t had the easiest school year so far. I have felt defeated, frustrated, and overwhelmed. My connection with my students has felt faint and really nonexistent… I’ve struggled to find ways to motivate them, encourage them more… then y’all come along and somehow it has put fire back into me. Your words have made me reflect since I read them… “keep fighting the good fight…” it was powerful. I had that “full moon feeling” that feeling of how much I love what I do. I thought of what it means to me and what those kids mean to me. I remembered why God chose me to do this. Your kind words lifted me up. So thank you. Thank y’all. What y’all are doing is amazing! Safe travels! I’ll be following!” ...

Good night from Gum Springs Campground in Winnfield, Louisiana, where we’re settled in to rest up for tomorrow’s visit to Winnfield Elementary.

It was foggy in the French Quarter when I woke up this morning. I sat in the gazebo and sipped coffee while practicing my voices for the Cookies of Chaos audio book recording I’ll be doing next Monday and Tuesday in San Antonio.

We worked and frittered and failed to not eat rice crispie treats until the mandatory 11am checkout, at which point we drove north for five hours to Winnfield. Our only side adventure was a stop for some apples and milk. That didn’t take long.

When we got to Gum Springs, we had our pick of campsites. It seems we’re the only ones here. Which is strange, because this place is just beautiful. It’s a short walk through fallen leaves to reach the banks of a lake.

We started a fire and counted the minutes until 6pm, when supper would be arriving. Our host Maggie Bryant and Winnfield’s school nurse Kacie Smith brought us a home-cooked meal: green salad, crayfish pie made by Kacie, and a cream cheese pound cake baked by middle school ELA teacher Carrie Rocket, the person who received the email from First Book inviting schools to apply for the Busload of Books tour.

Carrie passed the opportunity along to Maggie, who wrote an essay explaining what a visit from Robbi and me would mean to her school. The rest his history.

As much fun as we had in New Orleans, we’re much more at home in the crickety woods, the campfire crackling, hearts full from a good stretch of days and thoughts of crawfish pie for breakfast.

The Daily Minute: 12.8.22
In which we bask in the sweet Louisiana night and brace ourselves for the enormity of Texas.

Whoever you are, take your seat on the bus!